Virginia has the nation's fastest Internet, followed by Massachusetts, Delaware, Rhode Island and Washington, D.C., says Akami's “State of the Internet” report for the first quarter of 2014, Jack Linshi reports for Time. Alaska has the slowest Internet, with Montana, Kentucky and Arkansas not far behind.

The average Internet speed in Virginia is 13.7 megabits per second, Linshi writes. Massachusetts and Delaware are 13.1, Rhode Island 12.9, Washington D.C 12.8, Washington 12.5, New Hampshire 12.3, Utah 12.1, Michigan 11.8 and Connecticut 11.7. All of those states except Virginia saw increases in average connection speed from the last quarter of 2013, led by Michigan, which increased by 13 percent from the last quarter and 42 percent compared to the first quarter of 2013. Virginia's speed decreased by 4.3 percent since the end of the last quarter in 2013.

On the other spectrum, Alaska remains at the bottom, averaging 7 Mbps, despite a 7.8 percent increase since the last quarter of 2013 and a 33 percent yearly increase, Linshi writes. Montana, Kentucky and Arkansas are all at 7.3 Mbps. (Read more) (Google map) 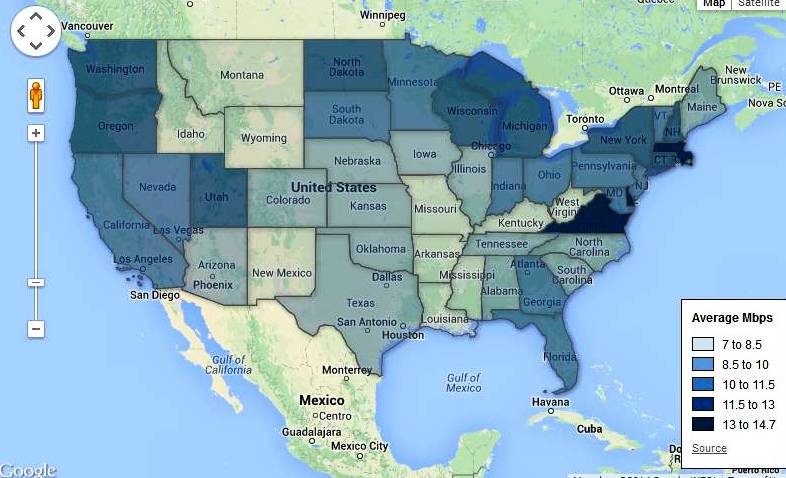 Does rural Vermont have the fastest Internet in the country? An article in Buffalo Tech claims it does. The article says that the rural telephone company Vermontel transformed one customer's Internet speed overnight "from over a megabit of poky DSL on Wednesday to over 600 Megabits of fiber-fast Internet connectivity on Thursday," and "Suddenly I had faster Internet than 99 percent of the U.S." (Read more)
Written by Tim Mandell Posted at 10/13/2014 01:48:00 PM