Last month was warmest September on record; 2014 on pace to be warmest year on record

Last month was the warmest September on record, and 2014 is shaping up to be the warmest year since the first records were recorded in 1880, Andrea Thompson reports for Climate Central. "This September was about 1.4°F above the 1951-1980 average temperature for the month, data from NASA’s Goddard Institute for Space Studies (GISS) showed. That makes it the warmest September in GISS records, edging out the previous September record set in 2005."

"Gavin Schmidt, the NASA GISS director, has cautioned against trying to find larger-scale meaning in the exact records of specific months, as the difference between first and second place can be very small and natural variability plays a large role from month-to-month and year-to-year," Thompson writes. (Read more) (NASA map) 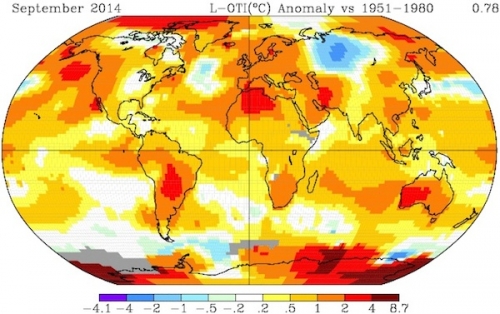