Texas is losing rural land faster than any other state; urban growth is wiping out rural areas

Texas, where 83 percent of land consists of privately owned farms, ranches and forests, is losing rural land faster than any other state, says a report by Texas A&M University, Marcos Vanetta and Neena Satjia report for The Texas Tribune. The main reason for rural land loss is continued growth around Austin, San Antonio, Dallas and Houston. 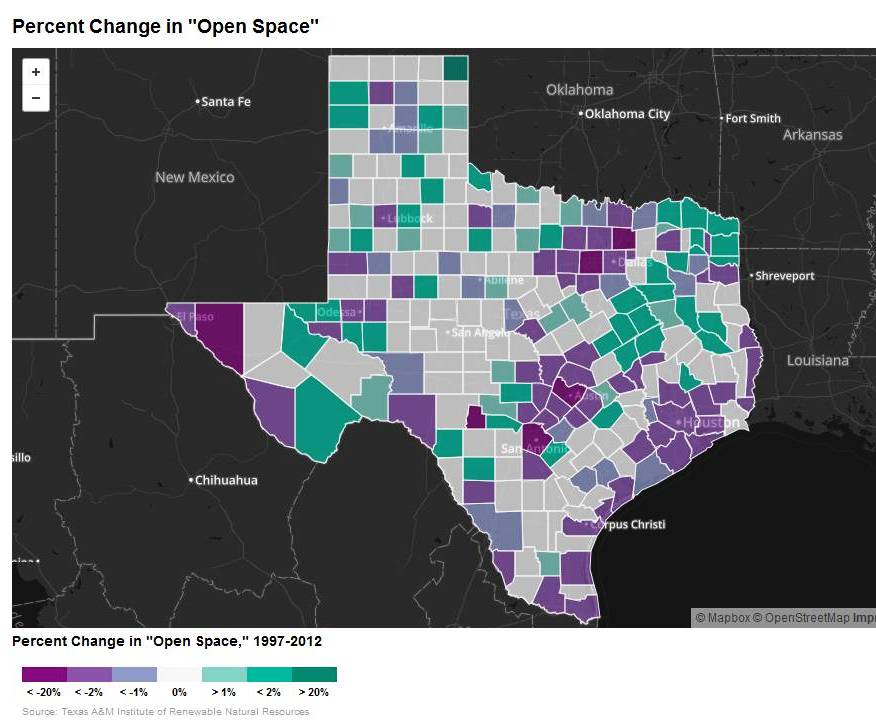 Dr. Roel Lopez, director of the Texas A&M Institute of Renewable Natural Resources and one of the study's authors, said that more than 54 percent of privately owned land loss "was related to development associated with population expansion in the state’s 25 highest growth rate counties," Schattenberg writes. Lopez said that "during this period, approximately 590,000 acres were lost from the agricultural land base in these counties.”

Blair Fitzsimons, chief executive officer of the Texas Agricultural Land Trust, told Schattenberg, "We have a lot of land in Texas, but we are losing it at a faster rate than most other states in the country, and that loss is having profound impacts on our agricultural base, our water resources and our native wildlife habitat.”

The market value of land has also increased in almost every county but is increasing at faster rates in metropolitan ones, Vanetta and Satjia write. "Travis County, for example, lost almost a quarter of its open space while land gained an average of $8,297 per acre in value between 1997 and 2012." For an interactive map of changes in market value, click here.
Written by Tim Mandell Posted at 10/14/2014 02:02:00 PM