As a joke, Dartmouth College buddies write-in frat brother for public office, and he wins election 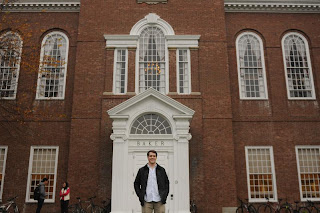 A common perception is that the rich, powerful big wigs dominate public office—and that candidates with the most money and their hands in the most back pockets win elections. But an election in Hanover, N.H., showed that the American way is alive and well, even if it might have started out as a joke. (Valley News photo by Sarah Priestap: Mick Wopinski)

When Dartmouth College senior Sam Todd saw that no candidates were running for the office of Grafton County register of probate, he wrote-in the name Mick Wopinski, one of his frat brothers, Nora Doyle-Burr reports for the Valley News. Todd asked his friends to also vote for Wopinski, and when votes were tallied, Wopinski won the election with 20 votes, beating out other write-in candidates, Philip Hanlon and Keggy the Kegger.

Wopinski, who didn't vote for himself, told Doyle-Burr, “For me, it was a joke. I had no idea it was possible that I could win.” Wopinski, who plans to graduate in June with a double major in economics and Russian, is currently researching the position to find out what the job entails and whether he will accept it. He said he does have plans to move out of state after graduation, which would make him ineligible to retain the position. (Read more)
Written by Tim Mandell Posted at 11/12/2014 01:57:00 PM