Coal was a hot topic during elections, but black lung disease gets little attention from politicians

Coal played a significant role in Senate and House campaigns in Central Appalachia, with candidates in areas like West Virginia and Kentucky discussing returning jobs to economically depleted coal areas or attacking the so-called "war on coal." However, the dangers of coal were not adequately discussed, Charleston Gazette reporter Ken Ward writes in a piece that appears in Environmental 360. 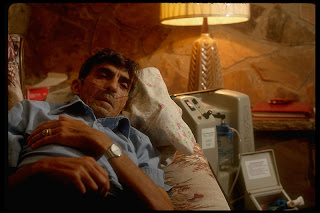 "Politicians and media pundits often conveniently forget that fact when they’re chattering away about the Environmental Protection Agency’s new rules on coal-fired power plants or the latest study showing climate change’s impact on sea level rise," Ward writes. "Major mining disasters get a lot attention, especially if they involve heroic rescue efforts, with worried families gathered at a local church and quick-hit stories about long lists of safety violations and inadequate enforcement." (The LIFE Images Collection: Former miner Albert Perry lying in bed, hooked up to an oxygen machine in 1991 because of black lung disease contracted through years of inhaling coal dust.)

"But most coal miners die alone, one at a time, either in roof falls or equipment accidents or—incredibly in this day and age—from black lung, a deadly but preventable disease that most Americans probably think is a thing of the past," Ward writes. "Coal-mining disasters get historic markers. Black lung deaths just get headstones."

"Experts at the National Institute for Occupational Safety and Health (NIOSH) reported that by 2012, the rate of severe black lung had reached 3.2 percent of workers in the Central Appalachian coalfields of southern West Virginia and Eastern Kentucky," Ward writes. "That’s a nearly tenfold increase over the disease prevalence 15 years earlier—a shocking statistic."

"Fifteen years ago, the rate of PMF had dropped to about 0.08 percent among all miners participating in a government monitoring program and 0.33 percent among active underground miners with at least 15 years of work experience," Ward writes. "Since then, the national prevalence of PMF has increased dramatically, and the rate of increase in Appalachia has 'been especially pronounced,' the researchers reported." Researchers said, “Excessive inhalation of coal mine dust is the sole cause of PMF in working coal miners, so this increase can only be the result of overexposures and/or increased toxicity stemming from changes in dust composition."

More than 1,100 miners were wrongly denied black lung claims after the doctor at Johns Hopkins Medical Institutions who interprets X-rays in black-lung claims failed to find a single case of severe black lung in more than 1,500 cases decided since 2000 in which he offered an opinion. However, media and politicians seem to largely ignore both those findings and the study.

"For two decades, the prevalence of black lung dropped continuously—from 6.5 percent in the 1970s, to 2.5 percent in the 1980s and 2.1 percent in the 1990s. But then the trend reversed, with rates climbing to 3.2 percent in the 2000s," Ward writes. "No one knows for sure exactly what is causing black lung’s resurgence. But it’s likely that, with the thicker coal seams mined out in southern West Virginia and Eastern Kentucky, operators are going after thinner seams with faster-moving machines that churn out more dust from silica-laced rock that surrounds the coal." But still, black lung remains an issue pushed into the background, if it's even discussed at all. (Read more)
Written by Tim Mandell Posted at 11/12/2014 01:57:00 PM