Despite Republicans' gaining control of the Senate during the Nov. 4 elections, the GOP may not be able to do much to slow down President Barack Obama's environmental agenda, which is about to kick into high gear, Andrew Restuccia and Erica Martinson report for Politico.

The coming rollout includes a Dec. 1 proposal by the Environmental Protection Agency "to tighten limits on smog-causing ozone, which business groups say could be the costliest federal regulation of all time; a final rule Dec. 19 for clamping down on disposal of power plants’ toxic coal ash; the Jan. 1 start date for a long-debated rule prohibiting states from polluting the air of their downwind neighbors; and a Jan. 8 deadline for issuing a final rule restricting greenhouse gas emissions from future power plants," Restuccia and Martinson write. "That last rule is a centerpiece of Obama’s most ambitious environmental effort, the big plan for combating climate change that he announced at Georgetown University in June 2013."

Obama also has announced that he and Chinese President Xi Jinping have agreed to an initiative to curb each nation's carbon emissions during the next two decades, Restuccia and Martinson write. "And on top of all that, the administration is expected in the coming weeks to pledge millions of dollars—and possibly billions—to help poor countries deal with the effects of climate change." 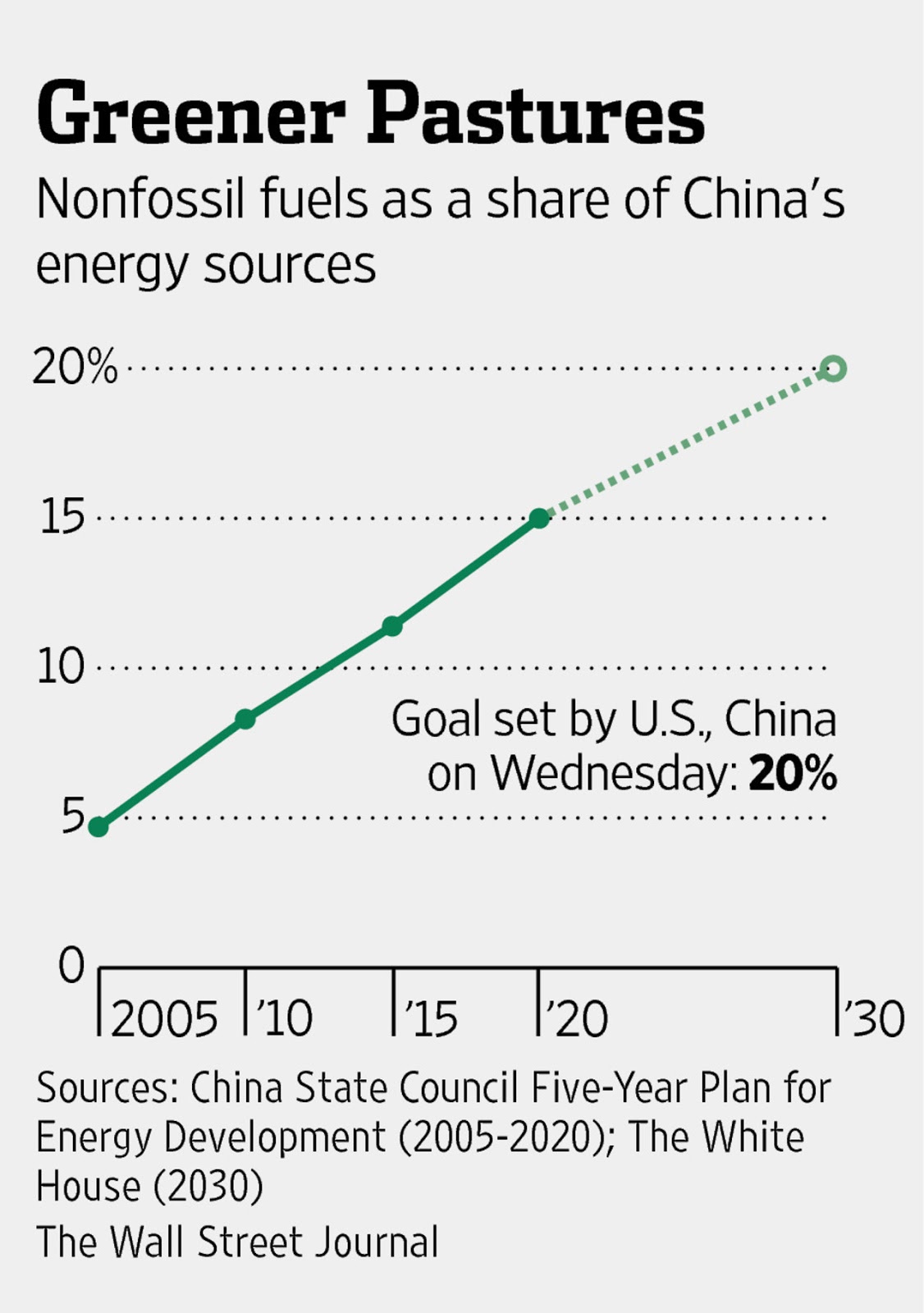 Advocates of action to fight climate change say Obama made a wise decision to partner with China, one of the world's most powerful countries and also one of its biggest emitters of carbon dioxide, William Mauldin and Amy Harder report for The Wall Street Journal. "China’s move to lower reliance on fossil fuels to 80 percent of its energy raised the prospect of a huge expansion in the market for alternative energy."

Fred Krupp, head of the Environmental Defense Fund, told the Journal, “It’s a game-change on two fronts: It’s a diplomatic breakthrough and a huge boost to the clean-energy market. Those two fronts are more important than the numbers.”

Because the U.S. and China are on board to cut carbon emissions, other countries may follow, Chris Mooney reports for The Washington Post. "If the agreement lays the groundwork for a broader global agreement—one that encompasses other major emitters like India, Japan and Russia—then that is the real payoff. That agreement could happen in Paris in late 2015, when the nations of the world gather to try to achieve a global agreement to cut greenhouse gas emissions."

Robert Stavins, an environmental economist at the Harvard Kennedy School, told Mooney, "I take what happened (Tuesday) as really one of the most important developments that I’ve seen in the international negotiations over the last five to 10 years," because the move lays the groundwork for more movement in reducing the emissions of other developing nations. (Washington Post graphic)

Sen. Mitch McConnell (R-Ky.) said before the Nov. 4 election that if Republicans gain control of the Senate and he is elected Senate majority leader (he was elected on Thursday), then he would make it his mission over the next two years to do everything in his power to stop Obama's environmental agenda. But that could be easier said than done, James Bruggers reports for the Courier-Journal in McConnell's hometown of Louisville.

"McConnell's and his fellow Republicans' six-year war on the president's environmental agenda could slam into a brick wall during Obama's last two years, despite the GOP's new, larger margin in the House and Senate take-over, experts and political observers agreed," Bruggers writes. Melissa K. Merry, assistant professor of political science at the University of Louisville, told Bruggers, "I don't see Congress accomplishing much in any policy area over the next two years. There is significant gridlock."
Written by Tim Mandell Posted at 11/14/2014 02:40:00 PM