Republican lawmakers who are critics of Internet neutrality may be exceptions among their party. A survey by the University of Delaware's Center for Political Communication found that 81 percent of Americans "oppose allowing Internet providers like Comcast and Verizon to charge websites and services more if they want to reach customers more quickly, that is, allowing what are often called 'Internet fast lanes,'" Max Ehrenfreund reports for The Washington Post. Even more surprising, 85 percent of Republican respondents said they support net-neutrality, while 81 percent of Democrats support it.

"These findings raise the question of why Republicans in Congress have been so quick and so forceful in their responses to President Obama's call for strict net neutrality rules," Ehrenfreund writes. "There is a convincing conservative case for net neutrality regulations. While that might be an attractive position for the GOP, some suggest that Republicans are just dependent on campaign donations from the cable industry." (Read more) (University of Delaware graphic) 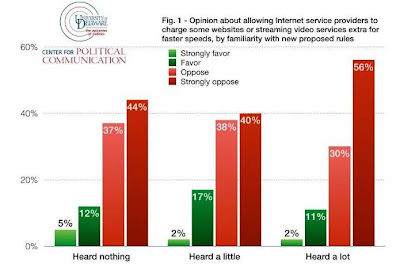