President Obama and Federal Communications Commissions chairman Tom Wheeler, a Democrat appointed to the position by the president, are not seeing eye-to-eye on net-neutrality, which could create chaos on an issue about which Democrats hold the majority decision, Brian Fung and Nancy Scola report for The Washington Post.

Hours after President Obama called for the FCC to pass tougher regulations on high-speed Internet providers, Wheeler was in a conference room with representatives from Google, Yahoo and Etsy saying he "preferred a more nuanced solution," Fung and Scola write. "That approach would deliver some of what Obama wants but also would address the concerns of the companies that provide Internet access to millions of Americans, such as Comcast, Time Warner Cable and AT&T." 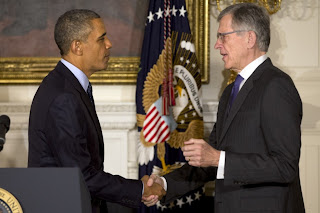 Meeting attendees, who described Wheeler as visibly frustrated, quoted the chairman as saying, “What you want is what everyone wants: an open Internet that doesn’t affect your business. What I’ve got to figure out is how to split the baby," Fung and Scola write. (Associated Press photo by Jaquelyn Martin: President Obama and then-nominee for FCC chair Tom Wheeler)

"The president wants clear rules to prevent Internet service providers from auctioning the fastest speeds to the highest bidders, a scenario that could favor rich Web firms over start-ups," Fung and Scola write.  "Wheeler, a former lobbyist for the cable and telecommunications industry, has floated proposals that aim to limit the ability of service providers to charge Web companies, such as Netflix or Google, to reach their customers. But critics have argued that his approach would give the providers too much leeway to favor some services over others."

That could put Obama and Wheeler at odds, Fung and Scola write. "A growing source of frustration for White House and congressional Democrats is that they have three of their own on the five-member commission at the FCC, a majority that should give them the power to push through a policy of their liking. But if Wheeler charts a different course, he could bring the other members along with him.
And, as Wheeler reminded participants at his meeting with Web companies Monday, the FCC does not answer to the Obama administration." According to officials, Wheeler said, “I am an independent agency." (Read more)
Written by Tim Mandell Posted at 11/12/2014 01:57:00 PM