Meeting to discuss smoking ban in rural Mass. town shut down after crowd gets unruly 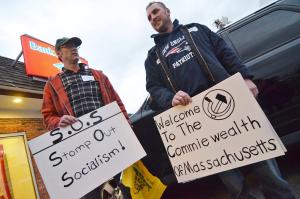 A Board of Health meeting to discuss a proposed smoking ban in a rural Massachusetts town was shut down after 23 minutes when tensions grew heated between vocal advocates and critics, Anna Burgess reports for the Sentinel & Enterprise. A crowd of 400, including local and national news, packed the Westminster Elementary School to hear about the proposed ban in the town of 7,000. (Sentinel & Enterprise photo by Ashley Greene: Rick Sparrow and Nate Johnson protesting the ban)

"The board's opening statement was given at 6:30 p.m., and by 6:53 p.m., Chairwoman Andrea Crete declared the hearing closed due to an unruly audience," Burgess writes. "Resident and merchant Brian Vincent said he wasn't surprised by how the hearing ended." He told Burgess, "This has been brewing so long, and it finally blew up. I'm just really disappointed. I feel like hundreds of people have wasted their time."

While the board said the ban would be good for the health of local residents, many people showed up to the meeting to protest the move, Burgess writes. Pete Valera, one of only four people who had a chance to speak before the meeting was shut down, told the board, "I'm surprised, and I'm appalled by what's going on in this town. I've been a resident in this town for many years, and I support my local business 100 percent. Taking money out of their pockets is like taking a spoon of baby food away from a crying baby."

With each speaker, boos and cheers continued to grow louder to the point that the audience was deemed unruly, and the meeting halted, Burgess writes. "Crete said the Board of Health will make a final decision on the proposed ban at a future meeting. It will allow written comments on the issue until some point after Dec. 1 and vote at some point after that date. Asked if the board would consider allowing a public vote on the tobacco ban, Crete shook her head and said this is the board's decision alone." (Read more)
Written by Tim Mandell Posted at 11/13/2014 04:27:00 PM