More than half of U.S. public school students are low-income; South, West have highest rates 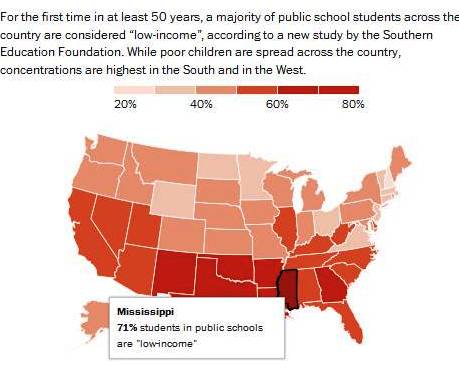 Carey Wright, Mississippi’s state superintendent, said providing quality preschool is the key to help poor children, Layton writes. Wright told Layton, “That's huge. These children can learn at the highest levels, but you have to provide for them. You can’t assume they have books at home or they visit the library or go on vacations. You have to think about what you’re doing across the state and ensuring they’re getting what other children get."

The Obama administration "wants Congress to add $1 billion to the $14.4 billion it spends annually to help states educate poor students," Layton writes. "It also wants Congress to fund preschool for low-income children. Collectively, the states and federal governments spend about $500 billion annually on primary and secondary schools, with about $79 million coming from Washington." But many Republicans in Congress have criticized funding preschools. (Read more)
Written by Tim Mandell Posted at 1/16/2015 01:58:00 PM