There is no doctor shortage in U.S., but there is one in rural and underserved areas, report says 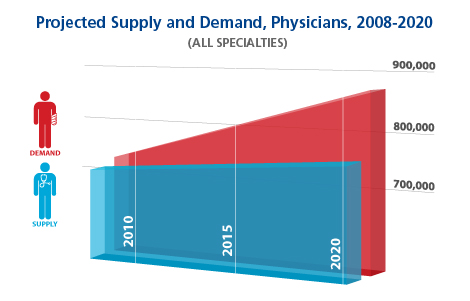 Rural America may be experiencing a doctor shortage, but the U.S. is not, says a report by the Institute of Medicine, Adrianna McIntyre reports for Vox. The Association of American Medical Colleges has said that by 2020 the U.S. will have a shortage of 91,000 doctors, 45,000 in primary care and 46,000 surgeons and specialists, McIntyre writes. (AAMC graphic: Some groups claim graphics like this are used to try to lobby the government to fund doctor training programs)

But the Institute for Medicine said they find 'no credible evidence' that a doctor shortage actually exists because "shortage projections use questionable doctor-patient ratios, don't consider geographic differences in physician supply and ignore the role of new technology and alternate providers like nurse practitioners."

Another problem, the report said, is that primary care doctors are paid less than specialists, which is leading more young doctors to gravitate towards careers as specialists, McIntyre writes. But even when young doctors go into primary care, they are more inclined to look in urban areas. Atul Grover, a physician and spokesman for the AAMC, said that "physicians weigh other factors when deciding where to practice, like prestige and quality of living. No salary bump can turn rural Idaho into Boston." (Read more)
Written by Tim Mandell Posted at 1/16/2015 01:58:00 PM