The goat factor: Map shows number of goats in every U.S. county as of 2012 USDA census

"You'll find commercial goat farms operating in 2,996 of the country's 3,143 counties," Ingraham writes. "Of the top ten goat-producing counties, eight are in Texas, and two are in Arizona. In Sutton County, Texas, goats outnumber people 14-to-1. In Edwards County, also in Texas, the ratio is 22-to-1. All in all, goats outnumber people in 21 U.S. counties, all but one of which are in Texas." (Post map of goat populations by county in 2012. To view an interactive version click here) 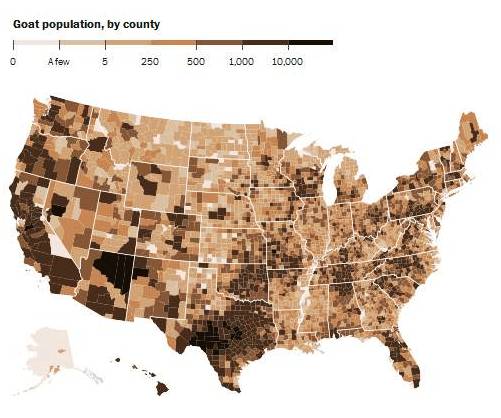