The increase of train traffic carrying crude oil through small towns in America combined with the inability of those towns to safely keep up maintenance of heavily-trafficked areas is setting the stage for a disaster of epic proportions, Curtis Tate reports for McClatchy Newspapers. Larry Mann, one of the foremost authorities on rail safety, who, as a legislative aide on Capitol Hill in 1970, was the principal author of the Federal Railroad Safety Act, told Tate, “It may not happen today or tomorrow, but one day a town or a city is going to get wiped out."

Oil boomed so fast, and demand has been so high, that small towns were not prepared for a sudden increase in train traffic, Tate writes. "Almost overnight in 2010, trains began crisscrossing the country carrying an energy bounty that includes millions of gallons of crude oil and ethanol. Tens of thousands of tank cars and a 140,000-mile network of rail lines emerged as a practically way to move these commodities. But few thought to step back and take a hard look at the industry’s readiness for the job." (ProPublica map) 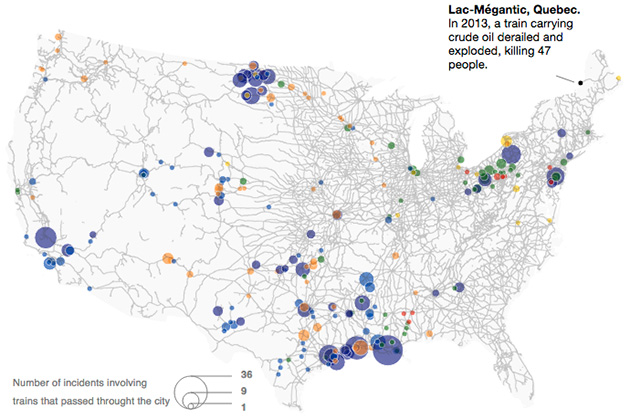 "Government and industry are playing catch-up with long-overdue safety improvements, like redesigning tank cars and rebuilding tracks and bridges," Tate writes. But 2013 was the worst safety year on record. More oil was spilled in the U.S. in 2013 than in the previous 37 years, and 47 people died from the derailment of a train in Quebec running from North Dakota to Maine.

The U.S. Department of Transportation is expected this month to issue new rules to govern the transportation of flammable liquids by rail, Tate writes. In July DOT proposed a two-year phase-out of older cars, but the oil and rail industry asked for an extension, saying that wasn't enough time. (Read more)
Written by Tim Mandell Posted at 1/13/2015 02:22:00 PM