From June 2013 to June of last year, 44 states grew in overall population, but 38 had smaller increases than the year before, according to recently released census figures, Tim Henderson reports for Stateline. The biggest increases were in the mostly rural South. The South and West added an average of 5,600 people per day from 2013 to 2014, and the Northeast and Midwest added fewer than 900 people per day.

"About 365,000 people moved to the South from other parts of the U.S. between 2013 and 2014, up 25 percent from the previous year," Henderson writes. "More people moved to the South than to any other region. Still, the overall number was far less than it was a decade ago, when the South attracted more than a million movers a year between 2004 and 2007. Moves to the West doubled to 103,000, the largest number since 2008, which helped increase the population of the West by more than 800,000."

The biggest population increase was in North Dakota, where the oil boom has helped the state grow by 2 percent, or 16,000 people, Henderson writes. "But that number was almost 30 percent less than last year’s 22,000 figure and was the state’s smallest population jump since 2011." Texas, which had led the nation in population growth since 2005, had the highest overall numbers, adding 400,000 people.  Alaska, Connecticut, Illinois, New Mexico, Vermont and West Virginia were the only states to see population losses. (To view an interactive version click here) 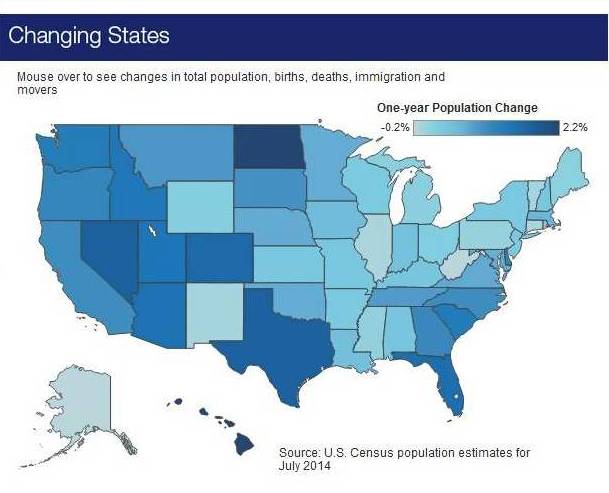