Senate to use Keystone XL Pipeline bill as an opportunity to debate climate change, oil exports

The House approved a Keystone XL Pipeline bill on Friday. The Senate is expected to pass its bill—and President Obama is expected to veto it—but the bigger picture should unfold during debate about the bill when the new Republican Congress begins its battle against the Obama Administration over other issues, Coral Davenport reports for The New York Times. 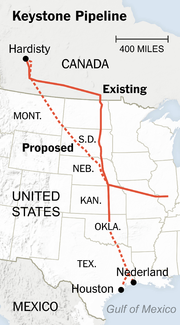 "The floor debate, which is scheduled to play out in the next two to three weeks, will serve as a showcase for various energy and environmental issues and is expected to involve votes on the science of climate change and humanity’s role in causing it, as well as on a proposal to lift a 42-year-old ban on exporting crude oil," Davenport writes. "The debate will also provide potential presidential candidates with a platform for promoting their own energy policies. Senators are expected to debate amendments on dozens of other energy issues like subsidizing heating bills for poor people, increasing taxes on oil production and promoting renewable energy."

"It has been eight years since the Senate held a similar debate before passage of an energy bill," Davenport writes. Majority Leader Sen. Mitch McConnell (R-Ky.) told Davenport, “I know senators from both sides are hungry for a real Senate debate. We’ll have an open floor debate on jobs, the middle class, infrastructure and energy.”

Lawmakers from both parties say the Keystone fight "is likely to be a Senate referendum on climate change," Davenport writes. "Democrats have criticized those Republicans who question that humans are causing global warming, which almost all scientists believe. The issue has divided Republicans, with conservatives openly questioning the science behind that conclusion and moderates trying to avoid it."

Sen. Bernard Sanders (Ind.-Vt.) "will introduce a resolution declaring that climate change caused by humans is a major threat," Davenport writes. Sen. Ted Cruz (R-Texas) "is expected to offer amendments of his own that would lift the oil export ban and speed approval of export permits for liquid natural gas," and Sen. Charles E. Schumer (D-N.Y.) "will counter with an amendment requiring that any oil shipped through the Keystone pipeline remain in the United States." (Read more)
Written by Tim Mandell Posted at 1/13/2015 02:22:00 PM