The type 2 diabetes medication Metformin found in Lake Michigan is changing the hormonal systems of fish exposed to it, says a study by the University of Milwaukee-Wisconsin, Keith Matheny reports for the Detroit Free Press. The long-term effects of the drug on fish and their ability to reproduce are unknown.

"The drugs [that] are not completely broken down by people's bodies after ingestion are excreted and then are not fully removed by wastewater treatment processes," Matheny writes. Reseacher Rebecca Klaper told Matheny that even though the levels of the drug in Lake Michigan are low, "It's enough to raise an alarm bell that this might be something that causes changes in reproduction of fish. It's something that definitely warrants further study." (Read more) (Free Press graphic: Pharmaceuticals and personal-care byproducts persist at low levels miles from sewage discharge pipes in Lake Michigan) 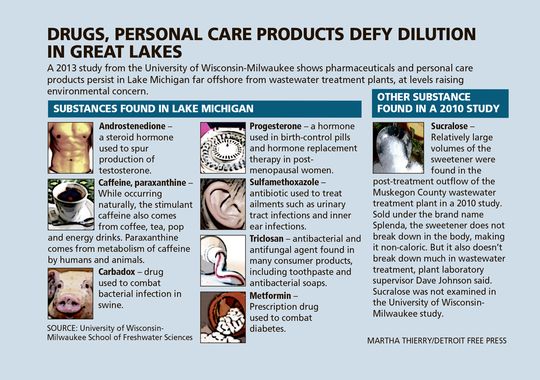