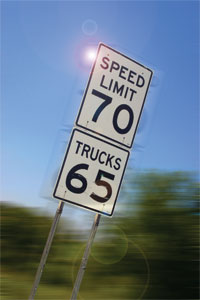 Truckers in Arkansas will soon be able to put the petal to the metal on rural interstates. Currently, the state has separate speed limits for big trucks and all other vehicles—65 mph for big trucks and 70 mph for everyone else. Beginning on Monday, big trucks will be allowed to go 70 mph, Noel Oman reports for the Arkansas Democrat-Gazette. Speed limits are the same for both vehicles on suburban interstates (65 mph) and urban ones (60 mph). (University of Arkansas photo)