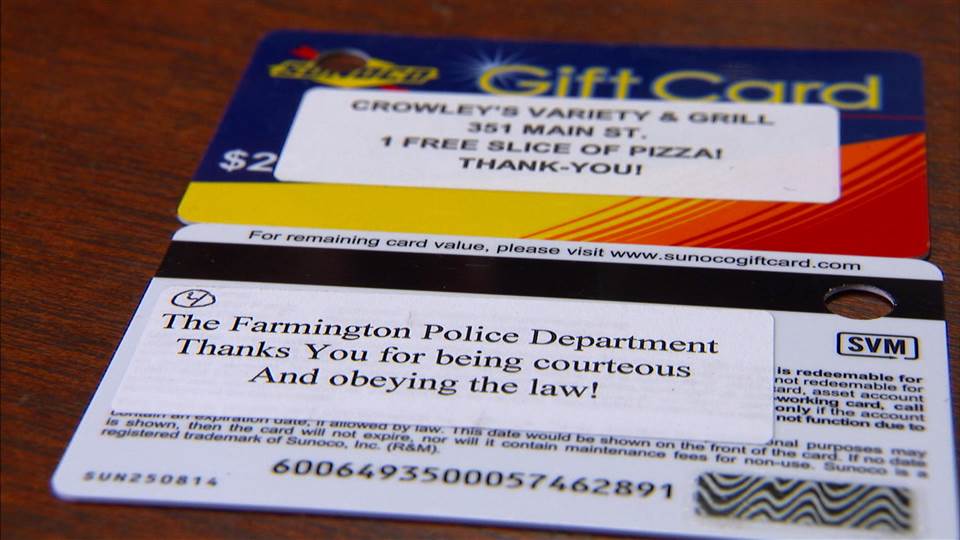 Getting stopped by police in Farmington, N.H., is turning out to be a good thing for many residents. The local police department in the town of 6,786 has "began issuing gift cards for free pizza and fries to residents who use crosswalks, turn signals and otherwise obey laws that are easy to ignore," Harry Smith reports for NBC News. Funding for the program has come from local donations.

"Farmington Police Chief Jay Drury said he came up with the idea amid a stretch of particularly bad winter weather, after watching a man downtown make his way to a crosswalk despite heavy snow," Smith reports. Drury told him, "I said to myself, that gentlemen deserves a medal for battling the snow that we've had and everything else. And it was a couple of days later, and it kept weighing on me, and I thought to myself, I can't give him a medal but maybe I can do something else."

The program has been a success in a town where there are a small number of criminals repeatedly being arrested, Smith reports. Police Sgt. Brian Driscoll told Smith, "We end up seeing 10 percent of the people 90 percent of the time. The same individuals over and over and over again. So the gift cards help form connections. And build community trust." (Read more)
Written by Tim Mandell Posted at 3/13/2015 12:25:00 PM