Report: Rural critical-access hospitals getting billions in extra Medicare funds, perhaps too much

"A law that allows rural hospitals to bill Medicare for rehabilitation services for seniors at higher rates than nursing homes and other facilities has led to billions of dollars in extra government spending," according to a U.S. Department of Health and Human Services report released today.

In 1997, Congress passed legislation to designate critical access hospitals to help small facilities in remote areas stay open, Matt Sedensky reports for The Associated Press. "Rather than paying set rates for services as throughout the rest of the Medicare system, the federal government reimburses the hospitals for 101 percent of their costs. They also often receive state funding and grants." 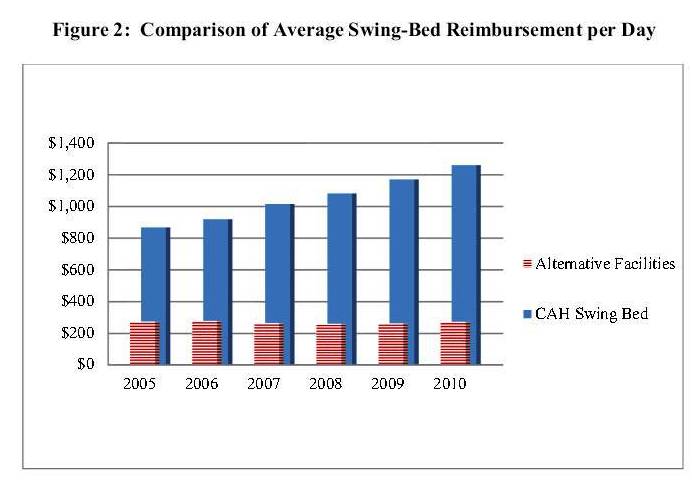 The report's authors said that "most patients could have been moved to a skilled-nursing facility within 35 miles of the hospital at about one-fourth the cost," Sedensky writes. "Hospitals juggling tough balance sheets have come to view such 'swing-bed' patients as lucrative, fueling a steady rise in the number of people getting such care and costing Medicare an additional $4.1 billion over six years, the report said." (Health and Human Services graphic)

Health and Human Services investigators "examined a sampling of 1,200 critical access hospitals that submitted swing-bed claims between 2005 and 2010, estimating 90 percent of the patients could have been cared for elsewhere," Sedensky writes. "The average swing-bed hospital reimbursement in 2010 was $1,261 daily, versus an average estimated cost of $273 daily if the patients had been moved. Medicare paid for 914,000 days of swing-bed care in 2010, up from 789,000 in 2005, the report found."  (Read more)

Rural health leaders ripped the report. "They view rural as simply a small version of urban. They don't recognize that it is a different health-care delivery system," said Alan Morgan, CEO of the National Rural Health Association. NRHA will conduct a free webinar on the topic at 3:30 ET Thursday, March 19. It has already released a video questioning the report's methodology.
Written by Tim Mandell Posted at 3/09/2015 01:40:00 PM