In Kentucky, where 93 percent of power generation comes from burning coal, some groups "say efforts to wall off the state's coal-dependent utilities from competing sources such as natural gas and distributed solar power are leading to higher costs for Kentucky's poorest communities," Joel Kirkland reports for EnergyWire.

One problem is that the Kentucky General Assembly is dominated by coal-friendly conservatives who aren't open to sustainable alternatives, Kirkland writes. "Anything that touches on energy is fiercely political in Kentucky and all the more so as the Obama administration presses on with plans to counter climate change," even though the Environmental Protection Agency's mandate for carbon-emission reductions in Kentucky is one of the nation's lowest. (EnergyWire map; for specific figures for each state, click here) 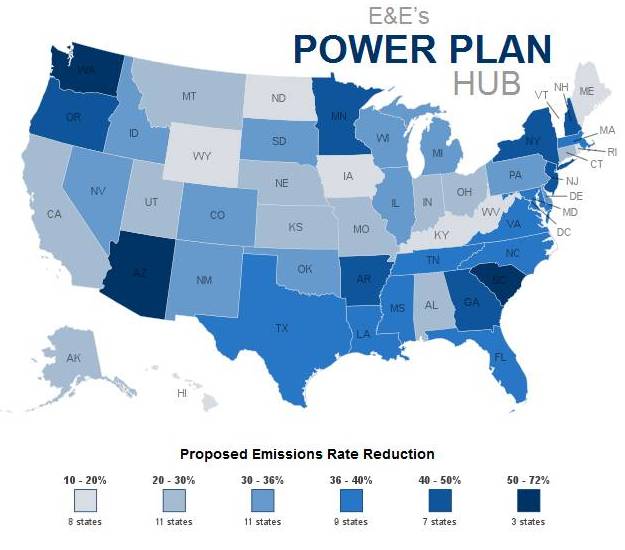 "Elected officials here are taking a scorched-earth approach to opposing Obama administration policies that affect utilities and nearby coal fields," Kirkland writes. "Kentucky is arguably the epicenter of opposition to EPA's Clean Power Plan, which would require states to cut carbon dioxide emissions from their power sectors by varying amounts through 2030." Longtime Kentucky Sen. Mitch McConnell, the Senate Majority Leader, has even called on states to ignore the rules. State Democrats haven't been much help either. Attorney General Jack Conway, the leading candidate for the state's Democratic nomination in this year's race for governor, "joined a multi-state lawsuit aiming to stop a final carbon rule."

"The 'just say no' campaign now embraced by McConnell and the state legislature comes from the playbook of Washington's powerful coal lobby," Kirkland writes. "At the top of that heap is the American Coalition for Clean Coal Electricity, which is run by Mike Duncan, a top Republican powerbroker. In Kentucky, Duncan is simply known as the chairman and CEO of the small Inez Deposit Bank in Inez, Ky., a friend of McConnell's and an old-school guardian of coal interests. Seemingly, the result is a state energy policy set in granite until EPA finalizes a rule."

"Under the Clean Power Plan, Kentucky would have to cut its power-sector carbon emissions rate 18.3 percent between 2012 and 2030," Kirkland writes. "In part because the state is so reliant on coal to keep the lights on, EPA's reductions target for Kentucky is among the lowest in the 13-state regional grid operated by PJM Interconnection, which serves 61 million people across the Mid-Atlantic region and Midwest." (Read more)
Written by Tim Mandell Posted at 3/12/2015 04:57:00 PM