Derailed oil trains used tougher cars, and they still ruptured; many states unprepared for such events 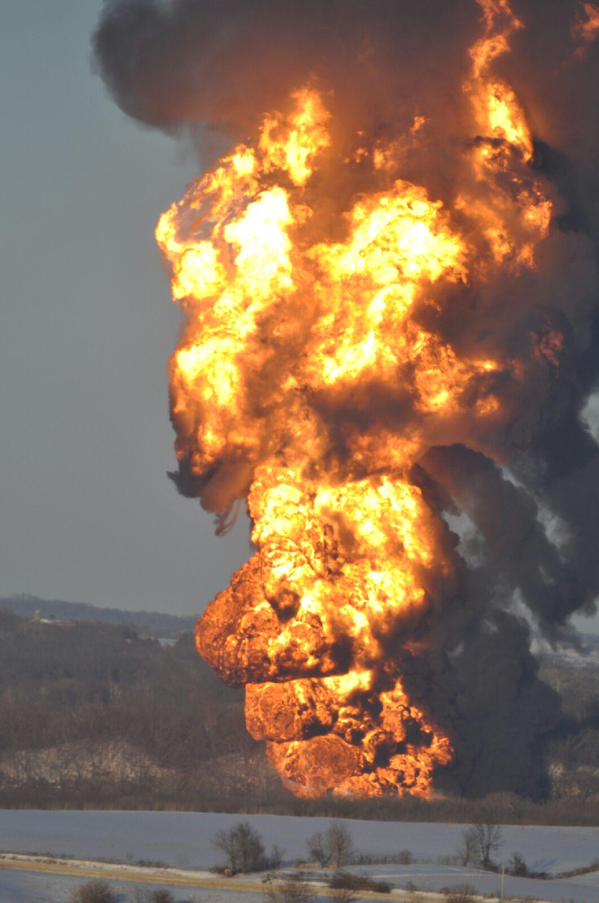 One answer to the rash of oil-train derailments has been tougher cars to carry the crude, but in recent derailments, "New and sturdier railroad tanker cars being built to carry a rising tide of crude oil across the continent have failed to prevent ruptures," report Russell Gold and Paul Vieira of The Wall Street Journal. Each derailed train has the new CPC-1232 cars, "which weren’t able to prevent the crude from escaping, leaking into one river and exploding into several giant fireballs." (Photo by KCRG-TV9, Cedar Rapids: Last week's derailment near Galena, Ill.)

That "could increase momentum for rules aimed at further reducing the risk of shipping crude by rail," the reporters write, noting that "Last year, the Transportation Department proposed additional new rules for tank cars carrying crude, presenting three main options. One would stick with the CPC-1232, but the other two would make new cars stronger and retrofit existing cars.
The White House is now reviewing these options and is expected to issue recommendations in May.

Meanwhile, some states remain woefully unprepared to handle such disasters. In Oregon, "State officials have moved slowly to address oil-train safety gaps since the trains started rolling in late 2012," Rob Davis reports for The Oregonian.

"Trains haul crude oil throughout Oregon, along some of its most iconic and scenic locations, passing Multnomah Falls, through the Columbia River Gorge and along the Deschutes River. They move through Portland south along Interstate 5, crossing the Willamette River," Davis writes. "Yet, planning and readiness in Oregon have lagged despite the dangers. Though there have been no major accidents in the state, oil trains have introduced catastrophic spill risks in areas where they did not exist before."

Rep. Barbara Smith Warner (D-Portland) has introduced legislation that "would levy a one-time, $3.75 million assessment split among railroads moving oil through Oregon to pay for spill readiness as well as the supplies first responders need to address oil train accidents," Davis writes. "A recurring $375,000 annual fee also would be split among those railroad companies to pay to continue oil spill planning along rail routes." (Read more)
Written by Tim Mandell Posted at 3/09/2015 11:39:00 AM