Honeybee population lost 42.1% of colonies last year, up from 34.2% the previous year

Thousands of beekeepers reported losing 42.1 percent of their colonies from May 1, 2014 to April 30, 2015, well above the 34.2 percent losses from the previous year, says a survey released today by the Bee Informed Partnership, Michael Wines reports for The New York Times. "The bees are not in danger of extinction, but their health is of major concern to agriculture, where their pollination services are estimated to be worth $10 billion to $15 billion a year."

The number of bees lost during the winter of 2014-15 was actually lower than in the winter of 2013-14, but an increase of summer losses led to higher overall losses, the survey said. Beekeepers lost 27.4 percent of colonies in the summer of 2014, compared to 19.8 percent in 2013.

"Nobody knows with certainty why. Beekeepers once expected to lose perhaps 10 percent of their bees in an average year," Wines writes. "But deaths began to spike in the middle of the past decade, when a phenomenon in which bees deserted their hives and died en masse—later named colony collapse disorder—began sweeping hives worldwide." Losses also have been partly blamed on pesticides. (Bee Informed graphic) 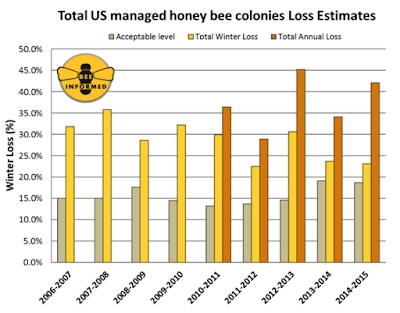