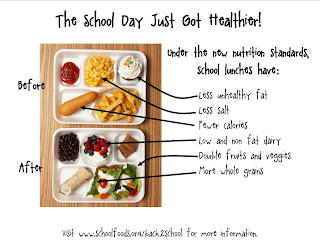 "In response, the Obama administration has put together its own coalition of celebrity chefs, health organizations and military leaders to mitigate the damage caused by its falling-out with the 'lunch lady' lobby—55,000 school cafeteria workers who were once a major ally," Halper writes. "Now, as the Republican-dominated Congress decides whether to renew the law, school lunch trays have become a partisan battle zone. The law expires on Sept. 30, although the status quo will remain in place if Congress deadlocks."

"The law and the regulations it spawned require school lunches to include significantly more fruits and vegetables and an infusion of whole grains; they also mandate a big drop in calories," Halper writes. "Schools were told to cut the salt and sugar in foods they sell, even in campus vending machines. Supporters of the law say that unwholesome frozen pizzas, chicken nuggets and other junk food that once were lunchtime staples helped drive the nation's epidemics of childhood obesity and diabetes."

Opponents say popular foods are being taken off menus and some children refuse to eat the healthier options, Halper writes. "The new lunch rules are strict. Schools are being told to restock pantries with ingredients alien to many students' palates. If children pass up the fruit, cafeteria workers in many cases can't sell them a meal until they take some, leading schools to complain they are paying for produce that ends up in the garbage," which is costing schools money. (Read more)
Written by Tim Mandell Posted at 5/11/2015 04:57:00 PM