Billionaire coal owner, who has faced numerous fines for violations, to run for W.Va. governor 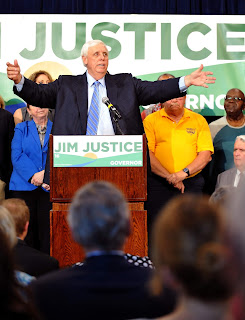 Jim Justice, billionaire owner of Southern Coal, which in 2014 faced 266 violations at coal mines in Kentucky, Tennessee, West Virginia, Virginia and Alabama, announced on Monday he is running for governor of West Virginia as a Democrat, Eric Eyre reports for the Charleston Gazette. Justice, who has donated large sums to candidates in coal-producing states and has a net worth of $1.6 billion, has never held a political office. Justice has previously been a registered Republican. (Associated Press photo: Justice announcing his candidacy for governor)

Only one other Democratic candidate has announced attentions to run in next year's election—West Virginia Senate Minority Leader Jeff Kessler (D-Marshall), Eyre writes. Current Gov. Earl Ray Tomblin, a Democrat, has reached his term limit and is ineligible to run in 2016.

Numerous fines and violations have dogged Justice's companies, Eyre writes. "At least nine contractors have sued Justice’s mines for not paying bills over the past three years, according to The Associated Press. Four of those nine legal claims, which in total exceed $1 million in alleged debts, have been settled for undisclosed amounts."

Justice has since hired conservationist and health-care executive Tom Clarke as an unpaid consultant to help his companies solve its problems. Justice also gained many fans when in 2009 he purchased The Greenbrier, resurrecting the struggling hotel, which employs about 1,600, hosts a PGA tournament and has a practice field for the New Orleans Saints, Eyre writes.
Written by Tim Mandell Posted at 5/12/2015 03:08:00 PM