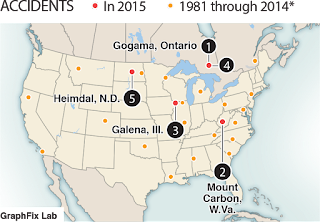 Emergency responders have expressed opposition to new rules for crude-oil trains, criticizing the information-sharing requirements, while saying many employees lack the training opportunities to respond to accidents involving hazardous materials, Curtis Tate reports for McClathchy Newspapers. A 2010 survey by the National Fire Protection Association said that "65 percent of fire departments involved in responding to hazardous materials incidents still have no formal training in that area."

Elizabeth Harman, an assistant to the general president of the International Association of Fire Fighters, told Tate, “The training that’s needed has been developed. This is the first step that needs to be funded and expanded for all first responders . . . We need to be prepared for it, and we’re willing to be prepared for it."

Harman said the new regulations "didn’t go far enough with respect to information that railroads provided to communities," Tate writes. "Under an emergency order the department issued last May, railroads were required to report large shipments of Bakken crude oil to state emergency-response commissions, which then disseminated that information to local fire departments."

"But under the department’s new rules, starting next year, railroads will no longer report the information to the states, and fire departments that want the information will have to go directly to the railroads," Tate writes. "It also will be shielded from public disclosure." Harman told Tate, “These new rules fall short of requiring rail operators to provide the information fire departments need to respond effectively when the call arrives." A Department of Transportation spokesperson said the agency was reviewing feedback from emergency responders. (Read more)
Written by Tim Mandell Posted at 5/12/2015 03:08:00 PM