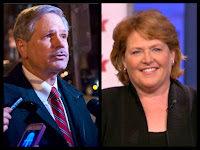 Two North Dakota senators, Republican John Hoeven and Democrat Heidi Heitkamp, are leading the opposition to the Obama administration's "Waters of the United States" rule, which would "increase the number of streams and wetlands that receive automatic protection under the Clean Water Act," Annie Snider writes for Environment & Energy Daily.

Hoeven is a member of the Senate Appropriations Committee and is trying to stop the rule through the appropriations process, while Heitkamp is gathering support from moderates to back legislation that would force the administration to go back to the beginning to redraft the rule.

"There is not one single federal regulation in the entire country that has caused more concern in the state of North Dakota than this Waters of the United States proposed regulation from the Corps of Engineers and EPA," Heitkamp said at a news conference last month.

The concern about the rule has less to do with the specifics of the rule and more to do with the region's farmers feeling as though both nature and shifting federal programs are boxing them in, Snider writes. Because the state has seen excessive precipitation in the past few years, farmers are finding new spots where water collects on their farms. "Now we've got a situation where water that didn't use to drain anywhere is now overland flooding to the point that water is traveling through eight or nine wetlands—from wetland to wetland," said Chad Weckerly, who farms 16,000 acres in Hurdsfield, N.D. (Read more)
Written by Melissa Landon Posted at 5/15/2015 01:05:00 PM