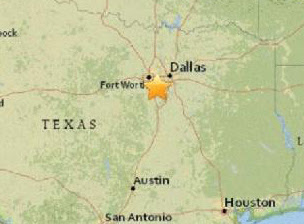 After a 4.0-magnitude earthquake in North Texas (right) last week, "four area drilling waste disposal well operators have shut down operations at five wells while data on seismicity in the area is collected," Joe Fisher reports for Natural Gas Intelligence. "The Railroad Commission of Texas told the companies that they would be required to conduct well and reservoir testing. Five wells are within 100 square miles of the quake's estimated epicenter."

Railroad Commission seismologist Craig Pearson told Fisher, "We take the issue of seismicity very seriously and want to move quickly to better understand if there are actions the commission should require of operators to protect the public, up to and including shutting down well operations. More data is always useful in making these kinds of critical decisions that impact the public and the industry."

Texas has had three earthquakes of magnitude 1.5 or higher in the past week, seven in the past month and 98 in the past year, says Earthquake Track.

Last week's earthquake in Venus, about 30 miles outside Dallas, "was the largest one in recent memory and one of about two-dozen to hit the area since 2009," Fisher writes. Testing will help determine the effect of injection operations on pressures within subsurface rock formations, the Railroad Commission said. Last month the Railroad Commission initiated proceedings that could lead to the permanent shutdown of two waste disposal wells near Azle that are thought to be linked with a swarm of earthquakes in the area." (Read more)
Written by Tim Mandell Posted at 5/12/2015 03:08:00 PM