Rural liberal arts colleges are struggling financially, leading many to merge with other schools or close altogether, reports Steven R. Strahler for Crain's Chicago Business. "Moody's Investors Service, which rates 80-some private colleges and universities with less than $100 million in annual operating revenue, says the pace of mergers and closings will accelerate." The March report said: “Few rural colleges will find viable merger partners, and sales of remaining assets could take years given the specialized nature of the facilities." 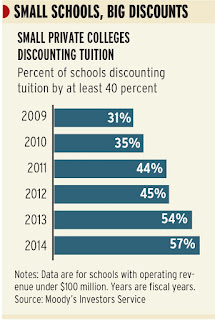 Many colleges are seeing a decline in enrollment and are being forced to drop majors, Strahler writes. Of schools rated by Moody's, 57 percent offered tuition discounts last year of at least 40 percent, compared to 31 percent in 2009. Also, one-third of schools had operating deficits. (Crain's graphic)

"During the mid-19th century, Midwestern colleges were deliberately stuck in the middle of nowhere, often by religious denominations, as a catalyst for growth," Strahler writes. But fewer students want to attend small schools in rural areas.

William Carroll, president of  Benedictine University, which is phasing out undergraduate programs and contemplating sale of its 17-acre campus in Illinois, told Strahler, “The higher education network in this state is a wonderful fabric, but it's getting frayed. Technology is finally kicking in big time. We have to adapt or die.”

In Illinois, "private schools received $30 million in the 2009 capital bill, an earmark unlikely to resurface soon," Strahler writes. "A $373 million state scholarship program called MAP suffered from $8.4 billion in recent across-the-board cuts. Compared with 2001, when every eligible applicant who attended college got a Monetary Award Program grant, in fiscal 2014, more requests were denied (165,000) than granted (136,000), according to the Illinois Student Assistance Commission."

"While Carroll, like other educators, sees schools becoming more like physicians' offices, diagnosing arriving students according to intelligence types and prescribing customized curricula, his technology concerns extend beyond the classroom," Strahler writes. Carroll told Strahler, “You need a campus that basically looks like home. We were losing (students) because we didn't have the facilities other campuses had. The Wi-Fi—even if it's there—it's not fast enough.” (Read more)
Written by Tim Mandell Posted at 5/11/2015 04:59:00 PM