31% of counties, mostly rural, will have only one Obamacare insurer in 2017

An estimated 31 percent of U.S. counties, most of them rural, will have only insurer offering policies under federal health reform in 2017, Drew Altman, president and CEO of the Kaiser Family Foundation, reports as part of a Kaiser analysis for The Wall Street Journal. That affects 19 percent of all Patient Protection and Affordable Care Act participants. Meanwhile, premiums are expected to increase, significantly in many cases. (Kaiser map: Estimated number of insurers participating in PPACA marketplace exchanges by county for 2017; click on it for larger version) 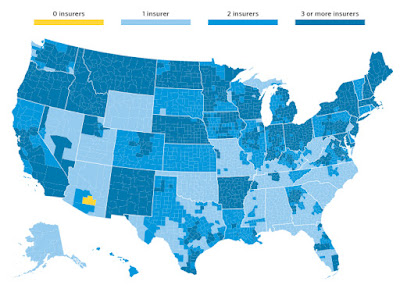 While the estimated number of counties in 2017 with only one insurer is a substantial increase from 2016, the Obama administration "is right to point out that the vast majority of enrollees will be insulated from premium increases by government subsidies if they enroll in one of the lowest-cost plans available in their area," Altman writes. "Still, some enrollees who receive partial or no subsidies cannot afford coverage." (Kaiser map: Where insurers are leaving in 2017) 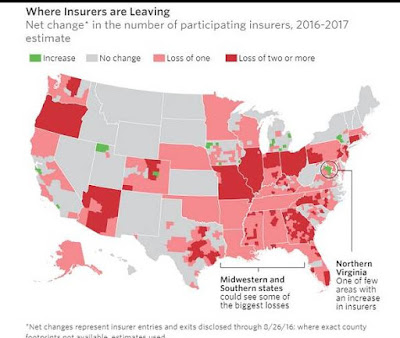 Altman writes that Obamacare has problems, but it isn't failing, with millions of previously uninsured Americans gaining coverage. One problem, he says, is misconception. "For example, many people with employer coverage believe that they are affected by premium increases in the marketplaces when they are not. About 11 million people are enrolled in the marketplaces. More than 13 times that many, around 150 million, have coverage through employers, and there are 66 million people in Medicaid and 55 million in Medicare." (Read more)
Written by Tim Mandell Posted at 8/30/2016 12:37:00 PM