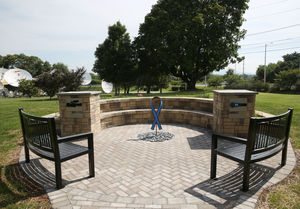 One year after a pair of Virginia television journalists were killed while reporting a story im a rural area, the station and its employees are still trying to cope with the tragedy, Ralph Berrier Jr. reports for The Roanoke Times. In August 2015 reporter Alison Parker and cameraman Adam Ward, of WDBJ-7, were shot and killed by a former newsroom employee during a live broadcast watched by thousands. The former employee later killed himself. (Times photo by Stephanie Klein-Davis: Memorial in front of WDBJ's offices)

"Chris Hurst still feels it, as do Parker’s and Ward’s families, their friends and co-workers," Berrier writes. "Hurst, a co-anchorman of WDBJ’s evening newscasts, has been sort of a public face of Channel 7’s grief, ever since he announced soon after the killings that he and Parker had been in love, living together and planning their future." He wrote in an email: “The Channel 7 family remains wounded. We cry, we question and we long for what used to be.”

Longtime anchorwoman Kimberly McBroom, who was part of the broadcast during the shootings, told Berrier, “I’m at the stage that, when I think about it, and what happened when the media was camping out on our doorstep, it seems like years and years ago. Other days, it feels like it just happened.” In addition to the shootings, "the station, home of the most-watched local newscasts for generations, was bought by a new corporate owner, which brought in new management and lost or let go several longtime news employees." Schurz Communications sold the station to Gray Television.

Hurst said the response from viewers has brought the station closer to its community, through charitable foundations, scholarships and other service to the local community, Berrier writes. Fully endowed scholarships in the names of Parker and Ward have been created at both of their respective schools, James Madison University and Virginia Tech.

The organization For Alison "raises money to allow children to experience the arts," Berrier writes. "WDBJ sponsored the Adam Ward and Alison Parker Memorial golf tournament last year, which raised $20,000" for a local high school and community college. A second tournament will be held Sept. 4. Also, a high school basketball tournament in Ward's name will be held Feb. 4, 2017. WDBJ also unveiled a memorial to Parker and Ward in front of the station’s broadcast center. (Read more)
Written by Tim Mandell Posted at 8/29/2016 10:22:00 AM