Series on Exxon's denial of role in climate change, when it knew different, earns another honor 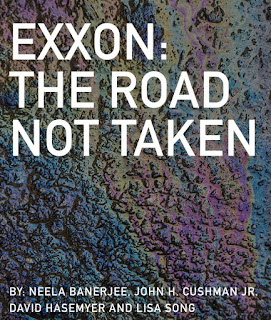 A quartet of reporters for InsideClimate News have received more national recognition for a series, "Exxon: The Road Not Taken," an eight-month investigation of the oil company's engagement with the emerging science of climate change. The series by Neela Banerjee, John H. Cushman Jr., David Hasemyer and Lisa Song was honored Wednesday with the John B. Oakes Award for Distinguished Environmental Journalism by New York's Columbia School of Journalism. In April the series received the Edgar A. Poe Award during the annual White House Correspondents Association dinner and also that month was named a finalist for the Pulitzer Prize for Public Service.

The Oakes award, founded in 1993 in honor of Oakes, a pioneer in environmental journalism and a New York Times editorial writer for  who died in 2001, "is given annually for 'news reporting that makes an exceptional contribution to the public's understanding of environmental issues,'" reports InsideClimate News. David Sassoon, publisher and founder of ICN, said, "We are honored to receive this prestigious award and follow in the footsteps of one of the pioneers of environmental journalism. It's a beat that needs to grow and thrive in this century like never before."

Judges from the White House Correspondents' Association said of the series: " As early as 1977, scientists at energy and oil giant Exxon Corp., now ExxonMobil, told top executives that fossil fuel emissions were warming the planet. Over time, however, Exxon became a leader in denying climate change and argued that the science was inclusive. The reporters . . . used documents, interviews and the public record from four decades to reveal a deeply disturbing trail from climate change discovery to denial. The story prompted the New York attorney general to issue a subpoena to force Exxon to disclose records in order to determine if it committed fraud under state law."
Written by Tim Mandell Posted at 8/29/2016 09:19:00 AM