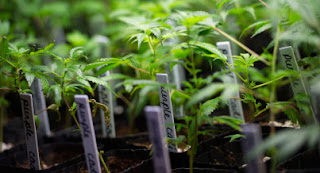 For years California marijuana farmers sought to be treated like any other farmers of any other crop, but "The price of that legitimacy has been steep and it is about to redefine the nature of the marijuana industry in ways that make many of its most committed supporters deeply uncomfortable, Sara Solovitch reports for Politico Magazine. "California’s iconic counter-culture drug is about to be treated just like a six-pack of beer."

"Under the new regulations, licensed distributors were given control over measurement, taxing and testing for all medical marijuana before it can move to the retailer," Solovitch writes. "The rules are modeled on the system that emerged at the end of Prohibition to wrest control from mobsters and their illegal liquor empires. States required wholesalers to bring alcohol from the manufacturer to the retailer, a system that has proven fantastically lucrative for distribution companies. Some of those players are now poised to make millions of dollars as the middlemen in California’s burgeoning medical marijuana market."

"The familiar alcohol distribution model gives comfort to California law enforcement and state regulators who still view marijuana growers with suspicion, even 20 years after medical marijuana was legalized," Solovitch writes. "But it runs counter to the 22 other states that have legalized marijuana in some form where cultivators sell their wares directly to retailers."

"It might also be the foundation for marijuana policy across the country," Solovitch writes. "In November, Californians will vote to legalize marijuana for recreational use, a ballot initiative that has received backing from Napster’s Sean Parker and Lt. Gov. Gavin Newsom, who’s running for governor in 2018. Polls indicate 60 percent support for the measure, which, if passed, is expected to grow the state’s $2.7 billion marijuana market into an industry worth $15 billion or more in five years."

"Hedge fund managers, venture capitalists and savvy entrepreneurs have begun flooding into the arena, alert to opportunities for legal profits that dangled out of reach when marijuana was underground," Solovitch writes. "The sheer size of California’s market (U.S. sales totaled $5.7 billion in 2015), along with pressure from prominent marijuana policy advocates, could influence other states contemplating legalization (there are eight with measures on the ballot this fall) and permanently shape the regulatory landscape nationally."

"But the transformation is causing discomfort within California’s community of renegade pot growers, many of whom worry that their long wished for legitimacy may end with them being co-opted by the implacable force of corporate America," Solovitch writes. "The price of that legitimacy has been steep and it is about to redefine the nature of the marijuana industry in ways that make many of its most committed supporters deeply uncomfortable."
Written by Tim Mandell Posted at 9/02/2016 11:27:00 AM