If Clinton can't win Iowa, where Obama won working-class whites, whither her party? 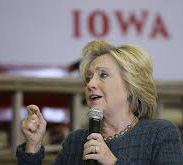 Iowa was the only battleground state where President Obama "won the working-class white vote in 2012," but it's a trouble spot for Hillary Clinton, where polls show her in "a virtual tie" with Donald Trump, Reid Epstein notes for The Wall Street Journal, to set up this point: The outcome of their race in the Hawkeye State "may help set the course for their parties’ futures" nationally. (Associated Press photo)

For Trump, "who has built his campaign upon winning the allegiance of white voters on the low end of the income and education spectra, Iowa is a bellwether. If he can’t win in Iowa, it could signal that his populist message isn’t strong enough to win the White House," Epstein writes. "For Mrs. Clinton, failing to maintain Mr. Obama’s hold on white voters without college educations would be the latest sign that the Democratic Party has lost its hold on rural America in one of the few places where it still had appeal."

The state's demographics indicated that "Trump should prevail—92 percent of the population in Iowa is white and just 26% have college degrees. But his campaign is understaffed and trailing Mrs. Clinton’s ground organization just a month before early voting begins here," Epstein reports. "Clinton has a decided tactical advantage on the ground. Mr. Trump has 18 Iowa staffers and the Republican National Committee has another 41, while Mrs. Clinton has more than 100 spread across 25 field offices in the state. Mr. Trump’s team is only now recruiting county chairmen for his campaign."
Written by Al Cross Posted at 8/31/2016 01:25:00 PM