Rural felons 50% more likely to go to prison, and for longer; drugs in play; NYT has county-level map 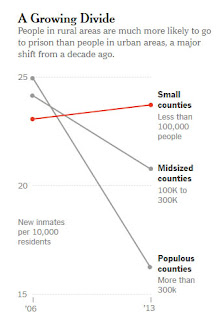 County-level figures show that people in rural counties are 50 percent more likely to go to prison and are being incarcerated for longer periods for the same crimes, Ty Wright reports for The New York Times: A decade ago people in rural, suburban and urban counties were about equally likely to go to prison. Now, there is a "growing disagreement about how harshly crime should be punished," especially when it comes to drugs. (NYT chart)


"A bipartisan campaign to reduce mass incarceration has led to enormous declines in new inmates from big cities . . . but large parts of rural and suburban America — overwhelmed by the heroin epidemic and concerned about the safety of diverting people from prison — have gone the opposite direction," Wright reports. (NYT map: County prison admission rates; for an interactive version, click here) 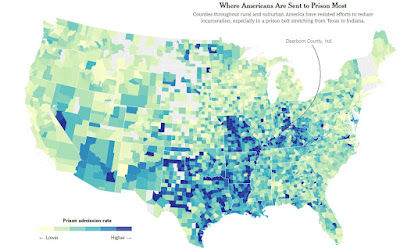 Dearborn County, Indiana, which sends more people to prison per capita than nearly any other county in the nation, "represents the new boom in American prisons: mostly white, rural and politically conservative," Wright writes. From 2006 to 2014, annual prison admissions dropped between 36 to 93 percent in Indianapolis, Brooklyn, Los Angeles County and San Francisco, "but large parts of rural and suburban America—overwhelmed by the heroin epidemic and concerned about the safety of diverting people from prison—have gone the opposite direction. Prison admissions in counties with fewer than 100,000 people have risen even as crime has fallen, according to a New York Times analysis" from U.S. Department of Justice data.

"The stark disparities in how counties punish crime show the limits of recent state and federal changes to reduce the number of inmates," Wright writes. "Far from Washington and state capitals, county prosecutors and judges continue to wield great power over who goes to prison and for how long. And many of them have no interest in reducing the prison population."

Critics say some rural court systems are out of control, Wright reports. Peter Wagner, executive director of the Prison Policy Institute, which advocates reducing incarceration rates, told him, “Letting local prosecutors enforce state laws differently throws all notions of equality under the law out the window. This data puts governors and legislative leaders on notice that if they want to put criminal justice reforms into effect, they need to look at how prosecutors use and abuse their discretion.” (NYT graphic: Changes in incarceration by county size)
Written by Tim Mandell Posted at 9/02/2016 11:51:00 AM