Study of broadband, entrepreneurs and creative class in rural areas gets surprising results

Access to broadband might not be as important to rural, non-farming entrepreneurs and the creative class as people think, says a study by researchers at Oklahoma State University, published in The Review of Regional Studies. Researchers Brian Whitacre, a professor and extension economist at OSU, and Ph.D. student Kelsey Conley found that high levels of broadband access could actually "serve to reduce the numbers of entrepreneurs and creative class employees in rural America." 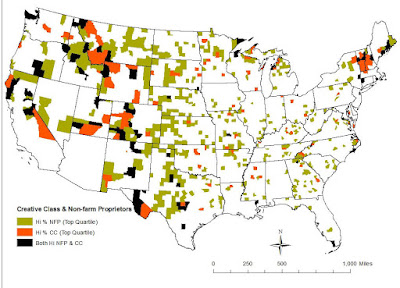 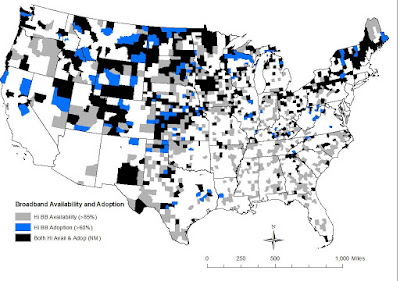 "Characteristics that were controlled in the study included factors such as age, race, education levels, unemployment rates, the existence of natural amenities that can effect development patterns, and the percentage of workers who were engaged in agriculture or manufacturing," Whitacre and Conley write. "The study also used a spatial technique that helps eliminate the impact that neighboring counties might have on broadband deployment and adoption."

"One explanation could be that increases in rural broadband adoption led to discoveries of job opportunities in non-entrepreneurial sectors," Whitacre and Conley write. "For example, an entrepreneur in a rural area might use their new broadband connection to find a better employment opportunity (either locally or perhaps in a more urban area). Therefore, this increased broadband adoption led to a decrease in entrepreneurship in rural area." (Read more)
Written by Tim Mandell Posted at 9/01/2016 09:38:00 AM