The presidential election showed an increasing difference among rural Republican and urban Democratic counties, Lazaro Gamio reports for The Washington Post. Of the 1,508 small counties—those with 25,000 or fewer people—1,362 voted more Republican in 2016 than in 2004.

"In counties with fewer than 100,000 people—which make up 80 percent of counties in the country but contain only about 20 percent of the population—9 out of 10 voted more Republican than they did in 2004," Gamio writes. 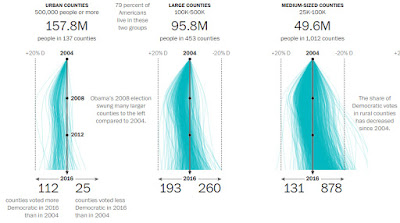 Exit polls also showed that Donald Trump's disparaging remarks about women did little to deter rural white female voters from casting ballots for him, Rich Morin reports for the Pew Research Center. An NBC News poll showed that 54 percent of all women voted for Hillary Clinton, but Trump won among white women, 53 to 43, and held a significant advantage among rural white women, 62 to 34. Among white men, Trump beat Clinton 63 to 31, and among rural white men, 72 to 24.
Written by Tim Mandell Posted at 11/18/2016 11:34:00 AM