Oregon group files, then withdraws, petition to secede from the U.S. in wake of election 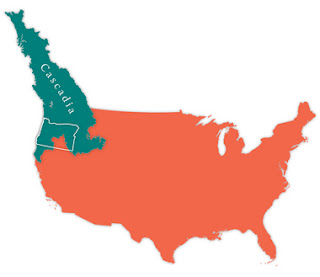 A group in Oregon filed, then withdrew, a petition to secede from the U.S., Lizzy Acker reports for The Oregonian. On Thursday, two days after Donald Trump was elected president, a petition was filed for a 2018 ballot initiative called the Oregon Secession Act. Results of the election brought renewed interest in Cascadia (Oregonian map), a proposed country that includes southern Alaska, British Columbia, Washington, parts of Idaho, Montana and Oregon as well as small parcels of northern California, Nevada and Utah.

On Friday organizers filed paperwork to withdraw the petition, Acker writes. They said it didn't get the type of response they had expected, citing death threats they had received and violence in the streets as a result of the election. Christian Trejbal, one of the petitioners, told Acker, "That's not the kind of conversation we were trying to have so we're pulling it." Democrat Hillary Clinton beat president-elect Donald Trump in Oregon, 52 percent to 41 percent.
Written by Tim Mandell Posted at 11/14/2016 11:16:00 AM