The Utah Department of Transportation has proposed raising speed limits on more rural highways to 80 miles per hour, Lee Davidson reports for The Salt Lake Tribune. In other areas limits would be raised from 65 to 75 mph for all vehicles except large trucks.

Reports show that when Utah previously raised speed limits highway fatalities increased, Davidson writes. Miles said the increased deaths were not from highways, but "occurred on arterial roads and city streets," not freeways.

An April report by by the Insurance Institute for Highway Safety (IIHS) showed that nationally increasing speed limits led to 33,000 traffic deaths from 1993 to 2013, including 1,900 deaths in 2013. Utah has some of the nation's highest speed limits. In 2014 Utah has 222 fatal crashes leading to 256 deaths, 125 of them in rural areas, according to IIHS. (IIHS map: Highest speed limits, as of January 2013) 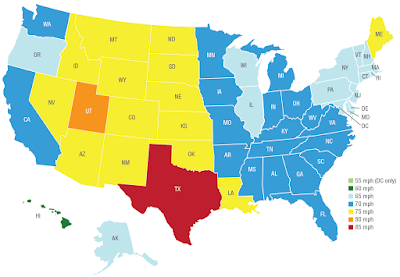