A statistical analysis of the presidential election by The Washington Post finds that "education was an especially strong predictor of the vote, with race and economic distress — particularly declines in manufacturing — playing important, yet somewhat less influential, roles," writes Loren Collingwood of the University of California-Riverside, who did the analysis by matching Donald Trump's vote with demographic factors from the Census Bureau's American Community Survey in a regression analysis, a statistical device for measuring the relationship between variables. 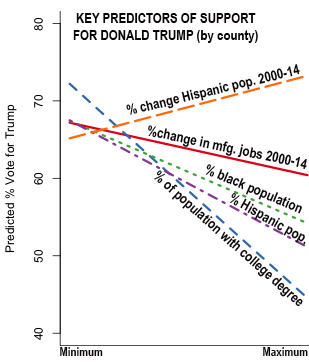 Collingwood's graph, adapted for clarity by The Rural Blog, shows the relationship between several variables and Trump’s county-level support. The steeper the line, the stronger the correlation between the measure and Trump’s vote share.

"The share of a county’s residents with a college education is the strongest predictor," Collingwood writes. "Counties with more college-educated residents gave Trump substantially fewer votes. This is in line with the exit polls, which revealed a fairly sharp cleavage on education."

Race mattered. "Size of the Latino population was an even stronger predictor in 2016 than in 2012. In 2016, the effect of moving from a prototypically low Hispanic county to a prototypically high Hispanic county was 14 points larger in the Democrats’ favor than in 2012," Collingwood reports. "I also found evidence consistent with the “racial threat” hypothesis. As shown by the orange dotted line in the graph, Trump’s vote was higher in counties where the number of Latinos has increased significantly since 2000. This suggests that some voters may have supported Trump as a way of expressing white identity in an increasingly diverse nation."

Collingwood told The Rural Blog that he didn't do a statistical analysis of rural and urban voting, because his exercise was based on county populations, but he said rurality was "significant, and large in favor of Trump," much like education and race. "Trump clearly tapped into sentiments felt and expressed by many rural voters."

Reflecting his emphasis on jobs and trade deals, "Trump also did better in counties experiencing a loss in manufacturing since 2000. (The downward slope of the red line means that Trump did better in counties with manufacturing losses, on the left, and worse in areas with manufacturing gains, on the right.) Indeed, economic struggles may well have been the factor that flipped some Midwestern counties in such places as Michigan and Wisconsin: The effect of the manufacturing variable is stronger in that part of the country than elsewhere," Collingwood writes. "In the end, these county-level results suggest that numerous factors contributed to Trump’s win. But the education gap was especially influential, with race and economic decline — particularly in parts of the Midwest — playing a supporting role."
Written by Al Cross Posted at 11/19/2016 09:26:00 PM