USDA's 'Rural America at a Glance' has data on employment, population, poverty and more 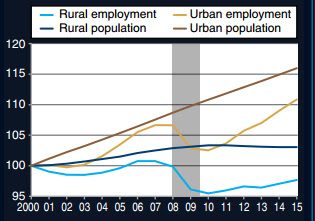 Unemployment in rural areas continues to decline, according to Rural America at a Glance, an annual report by the Economic Research Service of the U.S. Department of Agriculture that includes valuable information on trends in employment, population, median incomes and poverty.

Agriculture Secretary Tom Vilsack said in a statement: "At the depths of the Great Recession, rural counties were shedding 200,000 jobs per year, rural unemployment stood at nearly 10 percent and poverty rates reached heights unseen in decades. Many rural communities were ill-positioned to bounce back quickly. ... Rural America has begun a remarkable comeback."

Poverty rates, which rose during the recession, "continued to rise until 2013 in rural areas," states the report. "Poverty has been slow to abate in the wake of other recessions since the 1980s. Poverty rates in both rural and urban areas fell slightly in 2014 and more markedly in 2015—by 0.9 percentage point in rural areas and 0.8 percentage point in urban areas—but remain well above pre-recession levels."
Written by Tim Mandell Posted at 11/17/2016 12:55:00 PM