Former miners in struggling coal communities are being forced to reinvent their careers, Sophie Quinton reports from Eastern Kentucky for Stateline, "but reinvention isn’t for everyone. Some locals are too old, sick or poor to restart their lives somewhere else. And retraining isn’t a sure-fire way to get a new job in a place where so few employers are hiring." In many cases, starting a new career also means taking a pay cut for former miners.

Higher rates of unemployment in Eastern Kentucky, along with high rates of poverty, drug overdose deaths, cancer, diabetes and disability are leading some people to leave and others to retrain for jobs in fields such as electrical work and nursing, Quinton writes. But even those that leave don't go far. Analysis by the Federal Reserve Bank of Cleveland found that "most of the people who packed up their homes in one of the roughly 30 counties in Eastern Kentucky between 2011 and 2014 moved within the region." (Stateline map: Appalachian Kentucky has high poverty and unemployment rates. For an interactive version click here) 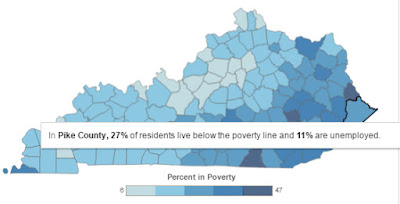 Overall, "employers are laying off more people than they are hiring," Quinton writes. "And getting job seekers to switch careers—let alone go back to college—isn’t easy." Another problem is a lack of experience applying for jobs. Jenni Hampton, a career adviser at an employment center in Pikeville, Ky., said that "many of the people who come in looking for help have never had to write a resume or prepare for a job interview before." (Read more)
Written by Tim Mandell Posted at 11/18/2016 10:04:00 AM