Rural Hispanics in poor counties, mostly near border, swung to Trump despite his insults

Donald Trump, who has made negative remarks about Mexican immigrants and wants to build a wall along the border, received big support from rural Hispanics, predominantly Mexicans living in impoverished counties in states along the border, Geraldo L. Cadava reports for The Washington Post. (Post graphic: Donald Trump in 2016 did much better than Mitt Romney in 2012 among rural Hispanics in many counties in the Southwest) 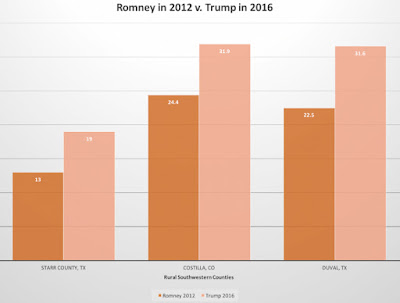 "States like New Mexico, Colorado, Nevada, Arizona, and Texas remained blue or became less red," Cadava writes. "But if you look closely at many largely Hispanic rural areas in these states, you find that Trump did better—and Hillary Clinton did worse—than did Mitt Romney or Barack Obama. Voting in these counties was much like that in similar counties in Pennsylvania, Ohio, Michigan, and Wisconsin," states where large rural support helped Trump win. (Post graphic: Clinton did much worse in 2016 than President Obama did in 2012 among rural Hispanics in many Southwest counties) 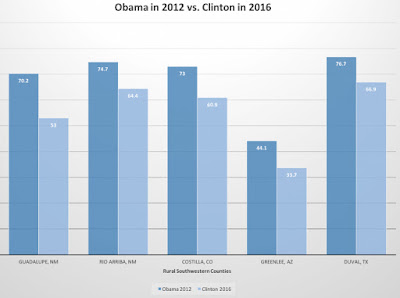 In some counties where Hispanics make up half or most of the population, Clinton got 10 percent fewer votes than Obama did, Gadava writes. "In many more heavily Latino counties, her votes lagged behind Obama’s by 3 to 8 points." While Clinton received fewer Hispanic votes than Obama, Trump "received a greater share of the vote than Romney had in more than a dozen counties with large Hispanic populations."

A similar trend showed that the Hispanic communities that supported Trump "were some of the poorest in their states," Gadava writes. "They’ve suffered the same tough economic circumstances as did some of the Midwestern counties that handed Trump the election. They’re more similar to than different from other forgotten counties across the United States, where voters upended the predictions of pollsters and shouted against the status quo."
Written by Tim Mandell Posted at 11/18/2016 11:31:00 AM