Opioid deaths have been on the rise in recent years, especially in rural areas. Reports from state health departments in Tennessee and Massachusetts show just how bad the epidemic has become and are examples of county-level data that should be available in every state to localize news stories.

Through the first three quarters of 2016 Massachusetts has seen 1,005 unintentional opioid overdose deaths, "with an estimated 392 to 470 suspected opioid-related deaths that may be added to that total," says a report released earlier this month by the Massachusetts Department of Public Health. Of those deaths 74 percent tested positive for fentanyl. The rate of heroin deaths is down this year. (Massachusetts DPH map: Unintentional opioid deaths,2013-15) 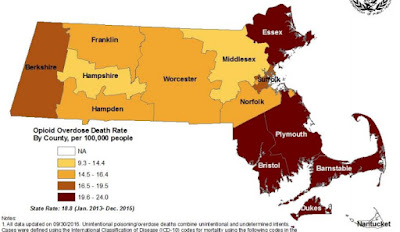