By Al Cross
Institute for Rural Journalism and Community Issues

After hearing endorsements from former CIA director James Woolsey and a bipartisan slice of Kentucky's congressional delegation, a state Senate committee today approved without dissent a bill to allow and regulate commercial hemp crops if the federal government gives the state a waiver from marijuana laws.

Eight other states have similar legislation, but some of them allow only experimental crops. Pro-hemp bills are pending in two of those states and five others, including Kentucky, Arian Campo-Flores reported Friday for The Wall Street Journal. (WSJ map; click on image for larger version) 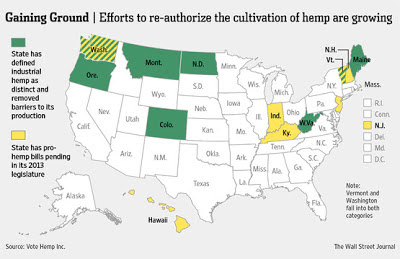 The Kentucky bill's advocates hope to make the state a test bed for the return to the U.S. of commercial hemp, which Woolsey said is legal in 35 industrialized Western nations, including Canada. "We cannot find one that has had a problem distinguishing industrial hemp from marijuana," Woolsey told the Senate Agriculture Committee. He said he is a member of the North American Industrial Hemp Council "basically because of my interest in prosperity for rural America."

The bill, pushed by Republican state Agriculture Commissioner James Comer, still faces obstacles, especially in the Democratic-controlled House, and the Drug Enforcement Administration has refused to give waivers for hemp production.

However, "The government interest in worrying about marijuana issues is subsiding some," said U.S. Rep. John Yarmuth, D-Louisville, who will ask the Obama administration for a waiver. Alluding to recent pro-marijuana legislation in some states, Yarmuth said at a press conference, "The overall climate of the country will make it much more easy for DEA to relax its policy on granting waivers."

Joining Yarmuth in endorsing Senate Bill 50 were Republican U.S. Sen Rand Paul, wearing a hemp shirt, and Rep. Thomas Massie of the Fourth District. They have each filed bills, with Oregon co-sponsors, to exclude from federal marijuana law any part of the hemp plant with 0.3 percent or less tetrahydrocannabinol (THC), the plant's psychoactive ingredient. For the House bill, click here.
State Police Commissioner Rodney Brewer (in first row of audience in photo) continued his firm opposition to SB 50, saying his main concern was that marijuana could be hidden in hemp crops.

Woolsey said pot growers would "have to be stupid or very high to take that route," because they could not prevent male plants from pollinating females, which stop producing THC-rich flower buds when pollinated. "The marijuana growers are about the last people who want industrial hemp," he said, because the fine pollen can travel far and even fertilize indoor crops. He also said hemp is harvested before marijuana.

Senate Majority Floor Leader Damon Thayer said Woolsey brought "a great deal of credibility" to the hearing because he had been "at the apex of deciding what is good and bad information" at the CIA.

Brewer also said parts of the hemp plant left not used in processing could be processed into a THC-rich oil, and Kentucky hemp could be used to cut high-THC marijuana from the West Coast. He said the state needs a pilot project to get beyond anecdotal evidence, not immediate commercialization. House Speaker Greg Stumbo has called for a study. Committee Chairman Paul Hornback, R-Shelbyville, the bill's sponsor, said that would be a waste of money.

At least two senators who were not expected to vote for the bill did so: newly elected Republicans Sara Beth Gregory of Monticello and Whitney Westerfield of Hopkinsville. "We have the potential to create jobs in rural Kentucky, especially," Gregory said in explaining her vote.

Westerfield, a former prosecutor who unseated a leading hemp supporter in the November election, said he "went all last year" thinking there was no difference in hemp and marijuana, then received conflicting information on both sides. He said he is still not certain, but thinks the state should try to take advantage of the opportunity "as long as we proceed with caution."

At a Capitol rotunda rally of hemp supporters after the meeting, Garrard County Attorney Mark Metcalf said he supports the bill because "It will bring industry that adds value to the crop."

State Rep. David Monson of North Dakota, a leading hemp advocate, told the committee that hemp is so bulky that its transportation costs are high, requiring processing plants to be relatively close to the fields. He and Gail Glenn, a farmer, said hemp is also a good rotation crop that fights pests and requires no herbicides or pesticides.
Written by Al Cross Posted at 2/11/2013 04:13:00 PM