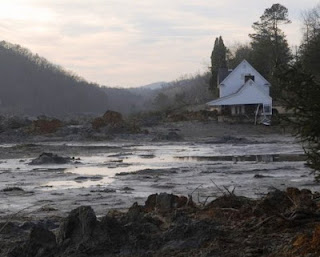 "A federal judge ruled today that the Tennessee Valley Authority is liable for the December 2008 coal ash spill that buried a large swath of Roane County, Tenn., under 5 million cubic yards of sludge," Manuel Quinones reports for Environment & Energy News. "U.S. District Court Judge Thomas Varlan for the Eastern District of Tennessee said that while events beyond TVA's control caused the ash pond failure, the utility's actions contributed to the spill. He also ruled certain liability protections do not apply in this case." For the ruling, click here.

"Varlan said the failure was caused by multiple TVA actions, including the placement and design of the failed dike and its decision to continue building up the wet coal ash stack at the site. The ruling also found that TVA’s failure to inform and train its personnel and the negligent performance of those personnel were substantial contributing causes," the Knoxville News-Sentinel reports. "Varlan indicated the next phase of the trial will look at questions related to individual property owners, such as whether coal ash was present on each plaintiff’s property; whether it damaged each specific property; and the amount of damage, if any, to each property and to each plaintiff." (Read more)
Written by Al Cross Posted at 8/23/2012 04:24:00 PM