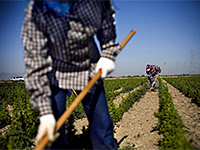 There's a shortage of farm labor in the West, and many blame stronger border controls and a stagnant guest-worker program. The Western Growers Association reports its members are experiencing a 20 percent drop in laborers this year. (Getty Images photo)

The lack of workers is forcing farmers to pay more for the labor they do get and to not harvest some crops, reports Jane Wells of CNBC. California farmer Craig Underwood said some of his crops have been "left in the field" because there weren't enough people to pick them. He's also paying pickers about $9.25 an hour to harvest peppers, Wells reports. Underwood also said much of his workforce is aging and they aren't being replaced because "migratory flows between Mexico and the United States have come to a halt." (Read more)
Written by Ivy Brashear Posted at 8/23/2012 03:57:00 PM