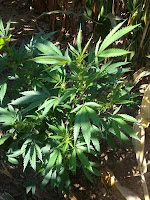 The drought is making marijuana crops a lot easier to spot, reports The Courier-Journal of Louisville. Indiana State Police got an early start to the annual marijuana eradication season this week, Sgt. Jerry Goodin told reporter Charlie White that the browning of drought-stricken corn makes the resilient green pot plants interspersed between them “stick out like a sore thumb.” (C-J photo by White)

In Kentucky, State Police Lt. Brent Roper said his agency started cutting outdoor marijuana plants last month. The drought hasn't affected the number of crops they've seized this year, he said, but "It does help when the corn starts browning," which is happening even in some of the state's moderate-drought areas. Roper's agency destroyed more than 120,000 plants through the end of July this year, compared with about 91,000 in the same period last year. Indiana and Kentucky continue to be among the top states for outdoor pot seizures, according to federal statistics. (Read more)
Written by Amy Wilson Posted at 8/22/2012 12:55:00 PM