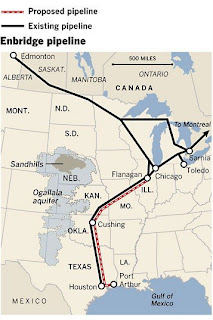 A major rival to the controversial Keystone XL oil pipeline project is vastly boosting its U.S. pipeline system, and avoiding the scrutiny that federal regulators, environmentalists and landowners are giving Keystone owner TransCanada Corp. Rather than building a single new pipeline, Enbridge Inc., also based in Canada, is replacing smaller, existing pipelines with bigger pipes, adding pumping capacity and installing new supply lines alongside existing ones. They are proceeding largely unencumbered, report Matt Pearce and Neela Banjeree of the Los Angeles Times, with plans to spend $8.8 billion to transport greater volumes of petroleum to the Gulf Coast. (LAT map)

"The company already has permits from the initial construction years ago and . . . the physical work will take place in the United States," so it doesn't need new permits, the reporters write. "The task of determining the safety or wisdom of Enbridge pipeline routes falls on a patchwork of local, county and state jurisdictions through the Midwest and East, most of which lack intensive pipeline expertise."

Enbridge's recent spills raise questions about its safety record. The company was recently fined $3.7 million for a Marshall, Mich., spill that dumped 20,082 barrels of oil in the Kalamazoo River in 2010, the biggest penalty ever from the nation's pipeline authority, the Pipeline and Hazardous Materials Safety Administration of the U.S. Department of Transportation. (Read more)
Written by Amy Wilson Posted at 8/20/2012 12:01:00 PM