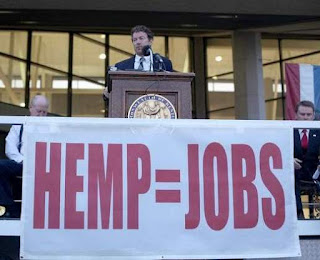 Kentucky's agriculture commissioner and one of its U.S. senators launched a push yesterday for the legalization of hemp as a fiber and oil product, a move that would require changes in state and federal laws — changes opposed by police who fight marijuana.

Commissioner James Comer and Sen. Rand Paul, both Republicans, held a press conference with Democratic state Sen. Joey Pendleton of Hopkinsville before the annual state-fair breakfast of the Kentucky Farm Bureau, which Comer said is now neutral on the idea after opposing it. Paul (speaking in Courier-Journal photo by Aaron Borton) said every other industrialized country allows the production of industrial hemp, and he wore a hemp shirt that he said he ordered online from Canada. Comer said that if Kentucky could be a pilot state for legalization, it would be a long-term advantage. The state was once a big hemp producer.

"The efforts by Comer and Paul face an uphill battle in both legislatures," writes Greg Hall, farm reporter for The Courier-Journal. "U.S. Rep. John Yarmuth, D-[Louisville], said it’s unlikely that an industrial hemp bill would pass in a Congress that hasn’t been eager to deal with other weighty issues. . . . Both of the agriculture committee chairmen in the Kentucky legislature said Thursday that they are willing to discuss the issue — but stopped short of saying they’d allow a vote." (Read more)
Written by Al Cross Posted at 8/24/2012 10:21:00 AM