The U.S. Postal Service’s regulatory overseer has endorsed the agency’s plan to shorten hours at thousands of mostly rural post offices. USPS offered the plan to reduce hours at roughly 13,000 offices as it dropped one to shutter thousands of them. Here's a USA Today map of the offices that would be affected; for an interactive version, click here. 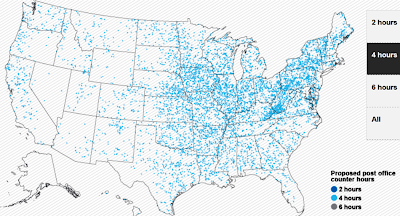 Postal Regulatory Commission Chair Ruth Goldway said she believed the proposal would ensure sufficient postal access nationwide. Postmaster General Patrick Donahoe has said the move would save the service roughly $500 million a year, through both the shorter hours and reduced benefits costs. An agency spokeswoman told The Hill that USPS was pleased with the regulator’s decision and would move full speed ahead on implementing the service changes. (Read more) The reduced hours appear likely to be in place before the end of the year.
Written by Amy Wilson Posted at 8/24/2012 03:13:00 PM